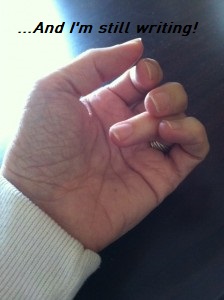 Have you ever heard of people who were, say, an artist who lost her sight? Or a singer who lost his voice? Or an athlete who lost the use of his legs?

Sometimes, that talent or skill God gave you is tested or challenged by the difficulties here on earth. Sometimes that test isn’t something that can be overcome as much as changed in form.

That football player can find purpose in coaching young kids who don’t have a father figure in their home. That singer can find her music in a piano. That artist can find expression in the artistry that is dance. And sometimes that disability can be overcome to allow the artist to continue. That is what God has allowed me to do with my writing.

When I was a child, I loved writing. I wrote all the time, but I never let anyone read what I wrote for fear it wasn’t good enough. Truth be told, it wasn’t but I was only about nine when I started. With more encouragement, I might have begun to share my writing to reach more people much earlier in life. But, I did keep writing and I got better and more public with it each year.

I have often had to prolong my writing due to fatigue from various chronic illnesses, but it didn’t stop me from writing. It only delayed the finished products a bit, but I kept writing.

Later on when brain fog from insomnia made it hard to put two sentences together, I began writing one liners I call JoJoisms. One of my Facebook memories reminded me that:

JoJoism #493 “Being a writer with brain fog is easier when you write one liners. You only need to focus for a sentence or two!” JoJoisms: Revealing Life’s Truths…as I think of ‘em!

When I started writing my communication materials for Art of Eloquence, I had no idea how to get my books traditionally published so I decided to publish them on my own website! And then when I wasn’t able to print them myself, I found a local printer who only worked with large companies and talked them into taking me on at their same rates even though I was not printing nearly the amount they were used to dealing with. And I was still writing!

Self publishing meant I had to create my own website even though I was the quintessential NON Techie! It took me a while and many, MANY hours of a frustrating learning curve, but I taught myself how to create websites and update them as I needed. And I was still writing!

In my writing for Art of Eloquence, I was asked to speak at several online and offline events. I’ve been shouted down for my beliefs and what I write. I was even told by a public school administrator that she would buy my materials for the entire school district if I’d only, “take the God parts out.” I refused and was forced to work harder and longer to sell my materials mostly to Christian homeschoolers, but I was still writing!

As I got older my fingers began aching as I typed. I learned I had arthritis and neuropathy compounded by fibro, but I powered through and took breaks when I needed to. And I was still writing!

The last several years has seen an increase in censorship of Christian conservatives as social media began shutting us down. I had a whole year when my Facebook fan pages were all effectively shut down, but I kept on writing on my personal wall and on my blogs. After I regained control of my pages, I am now sharing those posts on my respective fan pages again anyway!

Four years ago, I was granted a miracle in that I was a cancer survivor before even my surgeons knew I could have cancer. It was a rare and aggressive kind, but God allowed me to survive and I’m still writing!

A couple years ago, my hands began shaking more than just when I was hungry. I was diagnosed with Essential Tremors which makes typing, writing, and reading what I typed or wrote even harder. And I’m still writing!

When God gives you a passion for something, a talent for something, and then life throws you a curve ball, sometimes you pivot and find another way to satisfy your desire for that type of expression. And sometimes He gives you the perseverance and determination to find new ways to keep going.

That’s what the Lord did for me…And I’m still writing!