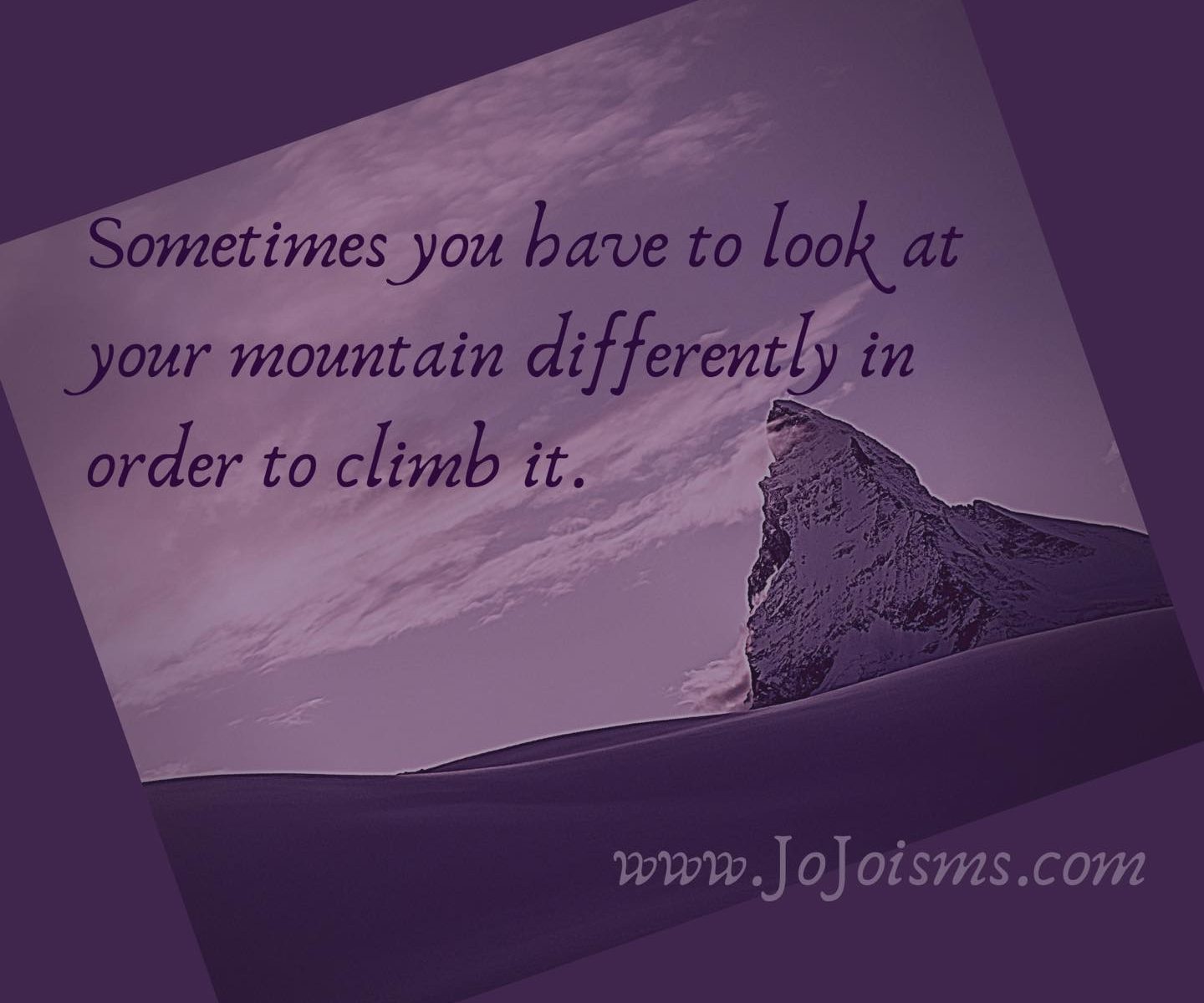 I was thinking about perspective one day and I created this meme:

I noticed that if you look at the side of the mountain with your head tilted, it looks like just a moderate walk to the top. God often has us look at things differently and do things differently such that it doesn’t feel like an insurmountable task to climb what we thought was a huge mountain.

Sometimes it feels like we’re swimming upstream trying to get things done with a body that doesn’t want to cooperate. Then, suddenly, we hear clearly how the Lord wants us to do it and things seem like we’re just riding the current. So…

Are you swimming upstream or are you letting the Lord lead you? This is part one of a four part series on how we can choose to live our lives joyously in spite of chronic illness or any other difficulties. Life is difficult at best and a mess most of the time. But it’s a wonderful mess that we can stop trying to control and just trust our Lord to take us where He wants us to go.

If you’ve ever been in a river, you know that it’s so much harder to try to swim against the current than to allow it to take you away. Well, that place He’s taking us may not look good, but if we trust Him, it will be a wonderful experience. OR the road there, which at first seems treacherous, may actually be EASY if we stop fighting against it and allow God to guide us.

Example 1: My son.
We were heartbroken when we lost several babies to miscarriage after my daughter was born. We went over NINE YEARS without hope because we thought God didn’t want us to have another child. We didn’t trust the Lord to handle the situation as much as we were disappointed that He didn’t give us another child. At first, we were devastated each time we found I wasn’t pregnant. All our energy was focused on that next child until one day we stopped trying and just allowed the Lord to do what He wanted.

Our miracle baby was born 9.5 years after my first. We had wanted two children, a boy and a girl who were about 2-3 years apart. That was our plan. BUT…If I had another child a few years after my daughter was born, I’d never have my incredible son and we would have been empty nesters a LONG time ago!

God knew what He was doing! He gave us what we needed when we needed it. Just as He always does!

Example 2: My cancer journey.
I thought it was the most awful thing that could happen to us. My husband was fired with no way to prove it was racially motivated. No job, no income, no insurance. BUT God…

But God had a plan and because of that plan I’m still alive! My husband and I spent hours and hours worrying, planning and doing things that would allow us to make a living until he got another job. Now, the doing WAS needed, but the worrying was NOT! It took so much of my energy of which so little remained as Fibro had hold of it.

After a while the company insurance ran out. It wasn’t that great anyway, but now we had none. We found that the state offered it to those who were in this kind of situation. When the doctor wanted to send me to a specialist and then for testing for a fibroid tumor (which we both knew was almost certainly gone now that I was nearing menopause), I only agreed because she was insistent and it didn’t cost me anything out of pocket.

If my husband still had that job and insurance, I would never have agreed to pay for tests and specialists to find something that was most certainly gone by now. They never would have found a cyst on my ovary that required surgery and they NEVER would have found a rare and very aggressive cancer that almost always takes the woman’s life because it is found too late to cure! I would have been dead long before and you wouldn’t be reading this blog! So, what looked like a disaster to us turned out to save my life!

Since only God can see ahead, we have no idea what He has in store for us that might be better than what we could have even hoped for. We only see the edge of the waterfall. As we are going over Niagra Falls in that barrel, we can only see and feel fear…unless we trust God to take us through. On the other side, we can sometimes look back to see how far He was willing to go to save us or give us what He wanted.

Next week, I’ll be back with some more on how we can find the good in a bad situation.